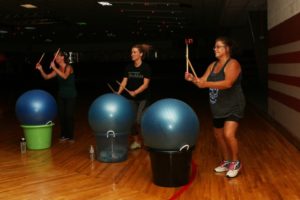 JACKSON, MI – Twice a week, anywhere from 15 to 45 people lug in a medicine ball, a bucket and a pair of drumsticks to Jackson’s Allskate Fun Center.

It has little to do with roller skating, however. The group is there for cardio drumming – which can best be described as a combination of drumline and modern dance.
Learn Drumming – Click Here

“It’s cardio, but it’s a lot of dancing,” said Deanne Everett, who’s been cardio drumming for a few months. “Just feeling the music and looking around and seeing the smiles on everybody’s faces (is enjoyable).”
“According to our Fitbit, it says we can lose quite a bit (of calories), between 600 and 900 calories in an hour.”

Unlike many other workout activities, Everett said cardio drumming never gets dull.

The instructor goes by the name “Coach Teri D,” and has been an independent personal wellness coach for 14 years. She started cardio drumming herself three to four years ago, then started the group. Eventually it outgrew its old location and moved to Allskate last September.

“When (my friend) showed it to me, honestly I thought it was the silliest thing,” the coach said. “I thought, ‘That is not exercise, you are not going to burn calories, you are not going to work up a sweat.’ But when I finally tried it and I was able to do the drumming to my own music, I fell in love with it.”

In addition to hitting the ball in syncopation, participants click the sticks in the air, jump and run in place and hit the ground with the drumsticks. Unless they blow a fuse from the music, there are no breaks during the hour session.

People of all ages and abilities can participate in the program and come whenever they please. It costs $6 and meets Tuesday and Thursday from 5:30 to 6:30 p.m.

Participants also receive an energizing green tea before the workout and a muscle-recovering protein shake afterword.

Michelle London has come to cardio drumming for 18 months. She often brings her 5-year-old daughter, who says cardio drumming “makes your heart say ‘Thank you’ for exercising so much.” London said beating on the medicine ball is a good de-stresser.

“It gives me energy. When you work out, you get the endorphins and you feel better,” London said. “Sometimes you’ll walk in and I’ll be like, ‘I could have just went home,’ but then when I’m done, I feel a lot better.”

Regardless of their coordination level, people pick up the activity within one or two sessions, the coach said. There are eight to 10 different moves they choreograph and replicate in all different types of songs, from country and rock to oldies and pop.

“According to our Fitbit, it says we can lose quite a bit (of calories),” the coach said. “I say it’s like anything, the more you put into it, the more you’re going to get out of it. They say between 600 and 900 calories in an hour.”

Allskate used to host a Zumba class, so the partnership with cardio drumming is not uncommon for the roller rink.

“It’s another body purification that we do here,” said General Manager Mark Oliver. “Roller skating, cardio drumming, it’s all about health and fitness. It’s a way that we can help people. Both activities are things you can do to enjoy, so it’s a release of stress.”

Coach Teri D and Oliver are hosting a fundraiser on Tuesday, June 28, at the cardio drumming class.

It will cost $10, with all funds going toward the Angel Ann Nicewander Memorial and Deb Mackinder. The 5:30 to 8 p.m. event also includes door prizes and special treats. Visit the Cardio Drumming with Coach Teri D Facebook page for more information.

Look for or start a cardio drumming class in your neighborhood.

Previous: Peter Erskine stretches out with his new album Dr. Um. The Doctor is in!
Next: Blue Man Group Celebrates 25 Years