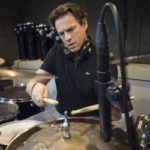 The following is a short interview done by Audix, a microphone brand Thomas Lang endorses.

A musician, a songwriter, an engineer, a producer, a publicist, a record label founder, an educator-there are not many hats that monster drummer Thomas Lang does not wear. His global career includes playing with artists such as Paul Gilbert, Robert Fripp, Glenn Hughes, Tina Turner, Robbie Williams, Kelly Clarkson, Sugababes, Bonnie Tyler, the Vienna Art Orchestra, and many more. He has headlined every major international drum festival and has toured the world several times as a solo artist. In a constantly changing industry, Thomas has navigated music’s channels and challenges with the enthusiasm and work ethic that have driven him through an illustrious career-from a small town in Austria to the hub of the entertainment world and his current home, LA.

He was born to be a drummer, something he discovered very early on at age four. “In Austria when I was growing up, there wasn’t any international music on TV,” Thomas says. “There was only one show called Spotlight…half an hour of English and American music on a Sunday evening. And I saw this drummer on TV (I much later found out it was Joe English from the band Sea Level)…he already seemed like he was in command, simply by the fact that he was sitting down…I was intrigued.” A few days later, a young Thomas Lang saw a band playing in a fairground in his small village in Austria. “I walked up to the bandstand, right onto the stage, all the way up to the drum set while the band was playing, and I held on to the bass drum from the front of the kit…and that was it. The power, the noise, all the shiny chrome and metal, and I could literally feel the air pressure of the kick drum… I remember that was it for me; I was completely hooked.”

Thomas spent the next several years taking drum lessons with expert teachers. His first teacher was the chair of the Vienna Philharmonic Orchestra, who taught Thomas one of the most important lessons he learned-how to practice. “The first four weeks, taking lessons with him as a five-year-old, he taught me what the practice rules are, what to pay attention to and how to focus on one thing at a time,” Thomas remembers of his early lessons. “From that point on I was practicing with extreme focus, with methods, goal setting, achieving goals, working through weaknesses exclusively in order to improve myself, and so on. It made a huge impression on my life.”

He went on to study music at Vienna Conservatory and the Musikakademie in Vienna. He completed his education at the conservatory even before he received his high school diploma, making him one of the academy’s youngest graduates. After graduation, he moved to London and set out on a world tour, playing with Austrian artist Falco, whose international hits included “Rock Me Amadeus” and “Der Kommissar.” In London, Thomas also worked with many producers and other high-profile British bands and artists, keeping busy with a constant stream of session and touring work.

2005 saw Thomas Lang move with his family to Los Angeles, where he built his career in production work, arranging, and songwriting (including the launch of his label, MUSO Entertainment), as well as many recording sessions, an online school, and other educational books and videos. “To write and produce has opened so many doors for me, not just in terms of understanding and communicating, but songwriting and production are a huge part of my career now.”

When asked how he keeps up with so many jobs, Thomas shrugs unassumingly and says he’s never done anything differently. “I was never just a sideman, or just a drummer, and it’s become a very natural thing for me now. I learned to organize everything and juggle things simply by doing it for a long time.”

With a demanding recording and touring schedule, Thomas relies on Audix Microphones. “For me, microphones are one of the most important pieces of my arsenal,” says Thomas. “I love Audix microphones-they are in my opinion absolutely the best. I’ve been with other companies before for years but I just love the way the Audix mics work, the way they sound, the way they are super reliable and specifically designed for drums and percussion instruments, and can take all that air pressure and never let me down. I like the way they’re pre-EQed for specific sounds and it’s exactly on my wavelength (pardon the pun) in regards to the sound I want. I need a microphone that is a perfect representation of the acoustic sound so I can have a lot of options in the mix, and for me Audix microphones are the best for that purpose.”

Thomas relies heavily on one mic in particular-the D6. “The D6 is my favorite dynamic microphone of all. I have microphones installed not only in my studio with the rim clamps on stands, but I have also the Randy May internal miking system with all Audix mics inside my shells, which is very unusual. Most of the drummers we know use either D2s or D4s for floor toms and rack toms, but I use D6 [mics] in all my drums, including all the tom-toms, even small tom-toms. All I have to do with the D6 is plug it in and turn it on, and I don’t have to fiddle with any EQ or compression-it has a perfect level, I get an incredible signal strength from it, and it has exactly the frequency that I like and the pre-designed kind of scoop at mid-frequencies which I don’t like. So it’s a perfect microphone for me.”

His advice to the next generation of musicians, producers, educators? Be unique. “There’s so much information online on the internet on YouTube today that is so accessible but it also makes everybody sound very, very similar. My advice is to try and develop your own ideas, be creative, and try to bring out your own personality in your playing and your approach. Wear many hats-get involved with everything from video recording and editing to mastering music and mixing records. Pay for the music that you like, support the artists you love…and do the right thing.”

Previous: Gary Benson Drum and Music News Daily
Next: What Playing in a Rock Band Taught Me