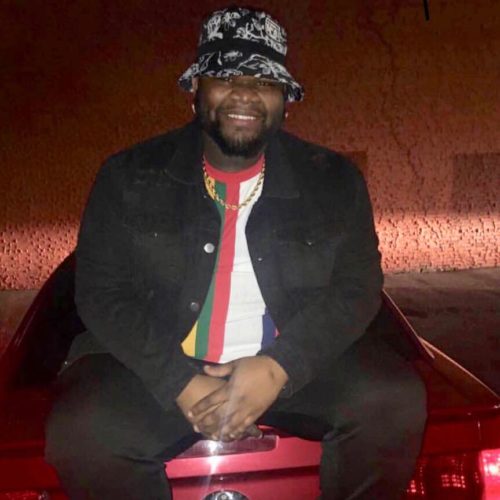 Since the age of two, Dwayne’s passion and musical abilities have been apparent. He started playing for personal enjoyment as a child and over the past couple of decades he has progressed to performing and touring with numerous bands.

A couple of weeks ago KickStrap and Benson Music had the opportunity to talk with Dwayne. In speaking with him his passion and enthusiasm for music shine through. When I hear Dwayne play I’m struck by his deep, funky groove and exuberance. Dwayne is carving out a great musical career doing what he loves doing!

Gary: Sorry, but my first questions gotta be where did the “Gummi Bear” come from?

Dwayne: I was on a country tour and on the road I drank a lot of water and ate a lot of gummi bears. My band went out to eat. I was sleeping so they decided it would be funny to leave me in the hot bus. I had gummi bears in my lap and they melted in my crotch area. So I had to go to the gig with gummi crotch.

Dwayne: Yeah, it definitely stuck on me.

Gary: Where did you grow up?

Dwayne: I grew up in Dallas. A place called Garland. I’ve been in Texas all my life.

Gary: Do you have a musical family? How did the drums come to you?

Dwayne: My dad plays organ and my sister is also a drummer. She’s very good. So watching those two kind of just brought it on for me. My sister is also a very good vocalist. Now her son is only 11 and he’s going to be a serious issue! (laughs) He’s playing great drums already.

Gary: How old were you when you started playing drums?

Dwayne: 7 is when I realized I liked it. I was playing before then, probably about 2, but 7 was when I actually started playing at church.

Gary: I know in one of your bands you double drum with another drummer? Do you do that often?

Dwayne: Yeah, so that group is Celestial Clockwork, a Motown party band. The way that came about is Eric, the other drummer, and I would play together in a jam situation and then it turned into a band format.

Gary: Do you find double drumming harder? Do you have to keep to a straighter, simpler groove?

Dwayne: For us it works well because we play off each other. We don’t step on each others toes. If one of us isn’t playing on that project it sounds empty. We don’t use tracks with that group so there’s more freedom. It allows us to come up with more parts.

Gary: How many bands do you play in?

Gary: Wow. I saw your April gig schedule. That was full!

Gary: Do you have a favorite type of music you like to play?

Gary: I know you have a very solid groove and you enjoy laying in the “pocket”.

Dwayne: Yeah, that’s where home is.

Gary: What’s your career goal with drumming? Are you making a living off of it now?

Dwayne: I’m definitely working on getting on bigger stages and bigger gigs. As of now music is pretty much it. I don’t believe in a “plan B” so music is my “plan A”. I put all my effort and energy into it.

Gary: That’s great. Do you find it a struggle at this point? Are you finding it hard to realize that goal?

Dwayne: It’s not necessarily a struggle. Personally, I was waiting on circumstances to be right. Waiting for this call or waiting for that gig. But you can’t wait on anyone. Nobody’s going to do it for you. Once I finally realized that and started taking initiative and making moves on my own my gig schedule shot up immediately. Yes, music can be a grind and hard work but it’s awesome. Sometimes I don’t get to see my family as much as I’d like to. There are sacrifices to be made. Certain gigs I won’t take. After you figure out what sacrifices you’re willing to make and what works and doesn’t work for you then it’s easier. Sometimes I don’t get a lot of sleep.

Gary: So when you decided to take action for yourself then things started to move.

Dwayne: Yeah. When I came back off the road I hit a little snag. I was sitting and waiting for calls but after I worked through that it’s been very cool.

Gary: Are you touring with any other bands coming up?

Dwayne: Yeah, I have some possible tours coming up but I don’t want to speak to soon. I’ll let you know when they firm up.

Gary: Do you give drum lessons?

Dwayne: I do. Right now I have a couple of students. I also do a summer mentor program.

Gary: What would you recommend for a beginning drummer?

Dwayne: If you can clap it then you can play it. For me, I know when I first got serious I had all these great ideas in my head but they didn’t come out right. I literally would make myself clap it through. After I was able to clap it then it was easy for me to play.

Gary: Yes, I’ve actually done that before too. One of my instructors would say “if you can get it out with your voice, sing the rhythm then you can translate that to the drums.” Do you recommend any particular exercises?

Dwayne: I practice a lot of stick control on my practice pad. Using a metronome I start with 60 bpm and move up to 120 bpm and keep going back and forth from 60 to 120 with paradiddles, triplets, 16th notes, etc. Then I’ll do a 5 minute burn out at the end with paradiddles at 250 bpm. Many times I can’t get it going at 250 bpm but I try for that. (laughs)

Dwayne: My practice routine: When I first sit down I loosen up playing whatever I want for a few minutes. Then I’ll go through my rudiments for 30-40 minutes. After that I’ll dial into whatever music I’m working on for the project I’m playing with.

Gary: What’s your drum set up?

Dwayne: For small gigs I’ll use a basic 4 piece. 1 up, 1 down. 1 crash and 1 ride with a splash in between. For a larger gig I’ll use two up. (rack toms) and 2 more crashes and a crash ride. TRX cymbals and Tama drums. The Tama Cocktail kit is great.

Gary: It’s been a pleasure speaking with you Dwayne. I’m looking forward to updates in your tour/gig schedule. We will keep you updated on Dwayne “Gummi Bear’s” touring and gig schedule.