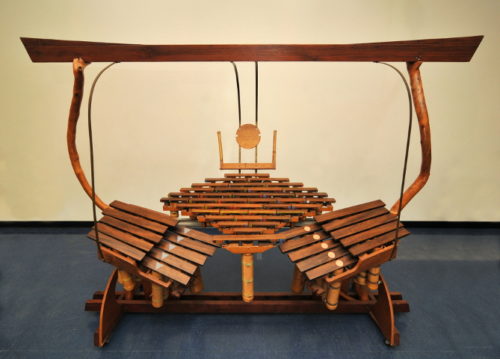 Back in the 1990s, in a cramped out of the way basement deep in the bowels of San Diego State University, I got to hear a pure, mathematically perfect musical interval for the first time. The sound came from a pump organ, modified by musical heretic Harry Partch. The organ was under the care of Danlee Mitchell, who kept Partch’s idiosyncratic legacy alive after Partch died in 1974. Once you hear just intonation you can’t un-hear the compromise that is modern “equal” tempered tuning (for an in depth explanation of the difference between just and equal temperament, this documentary explains it all). Let’s just say that hearing that “perfect” perfect fifth, was one of those moments that caused me to question everything I thought I knew about music.

But Partch pushed beyond just tuning. Why do we have only 12 notes in a scale? Why not 43? Here’s Partch explaining and demonstrating his 43 tone scale:

Since you can’t go down to your local music shop and buy 43 tone musical instruments, Partch had to get crafty. He described himself as “a philosophic music-man seduced into carpentry.” And, over the years, he built many beautiful musical instruments: Partch was a master of up-cycling, making use of military and industrial surplus. Below, his “cloud chamber bowls” made from the tops and bottoms of 12-gallon Pyrex carboys found in a UC Berkeley radiation lab. Here’s Partch talking about the cloud chamber bowls and playing them:

You can see all of Partch’s instruments here.

Partch’s music can be jarring at first. Then it grows on you. I think my favorite Partch composition is Daphne of the Dunes. It sounds like an artifact of an ancient culture that never (but should have) existed:

Partch pushed the cultural envelope so far that he’s often labeled (I think, disrespectfully) as an “outsider”. We should instead see him, both as carpenter and composer, as a visionary.

So to the person who suggested we do a music post, this one’s for you!

Previous: The Relationship Between Music and Science
Next: Secrets of the Creative Brain