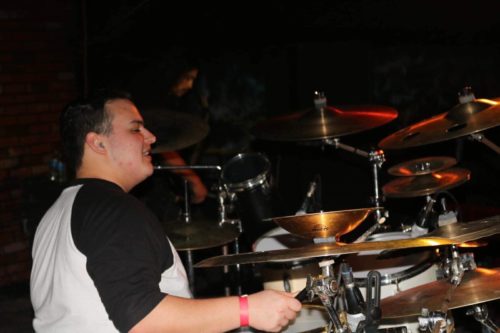 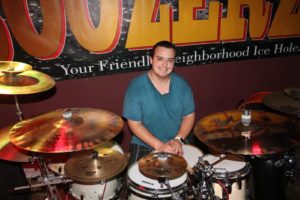 Scott “America” Bailey is a young drummer from Corpus Christi, TX. Scott caught KickStrap’s eye at Summer NAMM last year when he was competing in the World’s Fastest Drummer contest. Scott was competing for fastest feet. He placed 3rd from a pool of many contestants. After watching his amazing feet (pun intended:) we wanted to learn more from Scott.

Scott is working hard at forging a career in the music business. His practice on improving his footwork since joining his metal band “Blood of Our Brothers” is the kind of discipline it takes to pursue a career in drumming.

Scott is also very interested in experimenting and expanding the sonic possibilities of the drum set. One of the reasons his Sabian cymbal collection is impressive.

Gary: Scott “America” Bailey. Where did the “America” come from?

Scott: It started out as an inside joke between a friend and me. My friend changed his name on Facebook to something silly like that and it was 4th of July so I changed mine to Scott “America” Bailey. That happened to be a week before I joined my very first band, 8 years ago now, and they said, “yeah man, you’ve got keep that for your stage name.” Pretty much kind of stuck as an inside joke and became my thing.

Gary: Where did you grow up?

Scott: I was born and raised here in Corpus Christi.

“My parents bought me and my siblings the game Rock Band and I always liked playing drums on it.”

Gary: Do you have a musical family? How did you pick up the drums?

Scott: My parents encouraged musical growth in my brother and I. My brother played guitar and I played drums. My parents always took us to concerts. While my parents weren’t musicians themselves they wanted us to be in the musical arts and appreciate music.

Gary: How old were you when you started playing drums?

Gary: Why did you choose the drums as opposed to another instrument?

“I couldn’t even play the slowest double bass song that they had. I practiced this exercise religiously and my speed has increased 10 fold.”

Scott: Funnily enough it was because for Christmas one year my parents bought me and my siblings the game Rock Band and I always liked playing drums on it. That ushered me into actually learning how to play the drums.

Gary: Do you have any formal training in drumming or percussion?

Scott: I’ve taken a few lessons here and there but haven’t really stuck with it. I would say I’m pretty much self-taught. The lessons did help me with the rudiments and getting the very basics down. So lessons served as a a good foundation.

Gary: What would you say your drumming style is?

Gary: Do you have a practice schedule?

Scott: Whenever I can find time . Recently I’ve just been sitting down with a bass snare and hi-hat. I’m working on getting ideas for grooves. That’s been my go-to thing for a couple of months now and it’s really refreshing. As you’ve seen I play a very large drum set so playing on a little strip down set is a lot of fun. I find it gets my creative juices flowing and I discovered new grooves.

Gary: Do you have a career goal with your drumming?

Scott: I definitely want to drum professionally. I want to be a touring and session drummer. That’s the end goal for me.

Gary: I’d like to explore your foot work more. You placed 3rd in world’s fastest drummer contest for your footwork. What are some exercises you’ve worked on and/or recommend to build your speed?

Scott: I sit down and set a metronome starting off kind of slow, 150. I’ll practice eighth notes and sixteenth note bursts. Four measures of eighth notes and then one measure of 16th notes alternating back and forth. This helps build my speed and then I bump it up by 5 BPM after every few minutes. This exercise seems simple but it’s surprisingly very effective and hard to do. When I first joined the metal band I’m in, Blood For Our Brothers, I couldn’t even play the slowest double bass song that they had. I practiced this exercise religiously and my speed has increased 10 fold.

Gary: Your practice must have really paid off because your speed is incredible now.

Scott: On our new  Blood for Our Brothers recording some of the material calls for super fast double bass. We’re in the studio now and we’ll have a 6 song EP coming out hopefully by the end of summer.

Gary: What type of music is Blood Of Our Brothers?

Scott: Heavy metal may be pushing a bit to the death metal side.

Gary: How long have you been playing with them?

Scott: I’ve been with them for just about 4 years now.

Gary: Do you play in other bands?

Scott: I do. I’m in a cover band called Rockenstein Like Frankenstein. We do a little bit of everything, alternative rock covers some metal covers. We play anything from Weezer to Tool. It’s a very broad spectrum.

Gary: Do you have any shows coming up?

Scott: I think my next show is May 25th.

Gary: You have quite large cymbal set up. Is there a reason you’ve been drawn to so many cymbals?

Scott: I really like to explore different sounds and see what kind of possibilities I can get out of the drum set. I’m more of a percussive player. I like to add textures and different sounds. I really love exploring that area of drumming as opposed to only a simple set up with a few options for sounds. For me it helps push it to a different level.

I also have a couple of Octo-bons made by D-Drum.

The Cymbal setup:. All Sabian cymbals. Going from left to right Far-left I have:

18in custom-made power Bell ride. Over that I have an 18in custom China it’s a raw China. If you’re familiar with the Radial series from Sabian it’s like that but completely raw. A 13” set of HHX Groove hats. A 20-inch Paragon crash. A 17” HHX Evolution crash. A 7” hhx Evolution splash. 21” custom power Bell ride on the right. Above that a 21” Evolution Ozone. 19 in evolution crash. 18 inch pair of the AA sick hats. A custom AAX Zen China with a bell on top of that. And my latest addition is a gong. I’m bringing the gongs back.

Keep an eye on Scott “America” Bailey for he is a force worth noticing:

May 25th with Blood of our Brothers, Corpus Christi, Texas

August 9th with Blood of our Brothers, Corpus Christi, Texas

August 23rd with Blood of our Brothers, Corpus Christi, Texas

Staying local and not doing as many shows until our EP is done and released!

It was a pleasure to talk with Scott “America” Bailey. Scott is open, friendly and sincere. I’ll look forward to checking in with him in the near future!